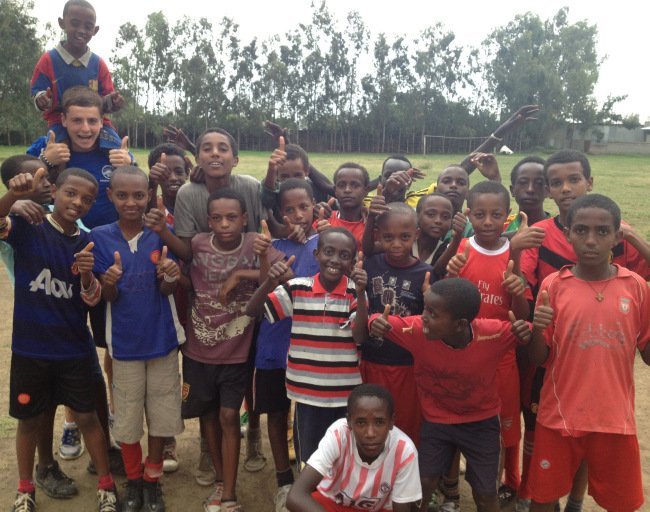 “On arrival to the country, my first consideration was to how incredible the vibe was. The people were extremely friendly, and despite me spending my two weeks waltzing around with a new sets of footballs down the main high street, the request to have one soon subsided once the locals realised I was taking them to the team: the priorities were clear, these kids were the future of Ethiopian footballing success.

In my short time on this earth, never have I ever met a set of students who were as polite and respectful to their coaches. Who was I to gain this respect instantly? I didn’t even speak the language, and despite this barrier, a group of 50 eleven plus year olds ensured that my two weeks were amongst my most enjoyable ever coaching the sport.

There was one kid who stood out above others. I was later told he is 13 years old, and has the name of Gamitchu. Well, I will not be overly shocked if I see this guy in the Premier League in ten years’ time. He has the raw athletic requirements, but the thing that blew me away was his awareness. As soon as I saw him play, it was like watching an 18 year old academy level central midfielder. He just seemed to always be beside the man with the ball offering a pass, and barely looked down once. I am going to go out on a limb here and say he is probably the most impressive player I have ever seen at that age – if he makes it big, I will be sure to refer back to this!

At the end of my first session I was invited for an opportunity for prayer. While not being the religious type, I joined the circle, and was treated to another unique cultural aspect of the game in the country. They did a group chant, coordinated by the team captain, which was completed diligently at the end of each session. The fact these kids thanked God for an opportunity to play football each time they did had me considering what other things I had taken for granted throughout my childhood. I further questioned myself when I was presented with a gift at the end of my two week stint as head coach – this from a group of students who had at best two football shirts each, and one pair of shoes (if it rained the day before, my numbers were considerably lower due to a lack of footwear options). Despite me donating shirts, shoes and footballs, and raising a significant sum of money for the charity, I couldn’t help feel my generosity paled in comparison with theirs – mine was still a fraction of my overall net gain in life, theirs considerably less so. An incredibly respectful, thoughtful and grounding collection of students, who had genuinely moved me more than I think I had ever been before.

One of the best experiences of my life. The kids were absolutely superb, and the opportunity to work with them was unbelievable.

Until next year Ethiopia: it has been an absolute pleasure!”