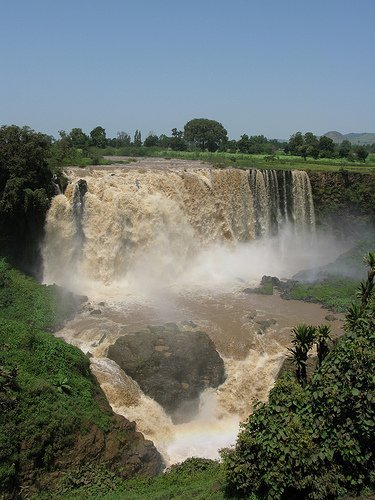 Bahir Dar is one of the most visited towns in Ethiopia. Nothing more than a sleepy waterside village (its name means “Sea Shore”) in the early part of the twentieth century, it later came to the notice of Emperor Haile Selassie because of its stunning position on the southern banks of Lake Tana and its relatively central situation in the northern part of the country. He had a palace built nearby and he even considered making it the site of a new capital city for Ethiopia.

It was occupied by the Italians in 1937 and this led to its being bombed by the British Royal Air Force in 1940, the year before the Italians were driven out of the country. A major bridge over the Blue Nile was opened by Haile Selassie in 1961, and two years later the Russians funded a Polytechnic Institute there.

Today its palm-tree-lined streets still buzz with students from Bahir Dar University. Tourists are also very much in evidence, staying in the attractive lakeside hotels that still continue to be built and using the town as a base to visit not only Lake Tana’s many island monasteries, with their many and varied historic treasures, but also the nearby village of Tis Abay from where a short walk takes them to see the often impressive waterfalls called Tis Isat. These falls are where the Blue Nile tumbles off the escarpment on its long journey through the Sudan and Egypt to the Mediterranean Sea.