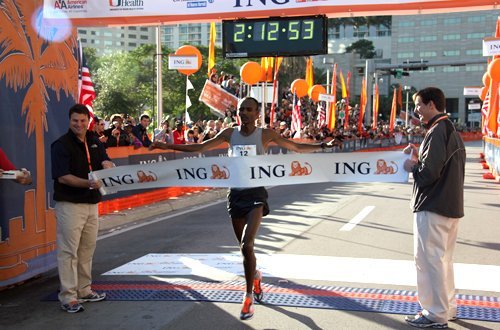 Just what is there about the Ethiopian long-distance runners that makes them so successful in world competition? Hardly a month goes by without yet more successes being announced for Ethiopia’s amazing athletes.

Tesfaye Sendeku Alemayehu’s gap-toothed grin grew wider by the second. After all, the 5-8, 123-pound Ethiopian had a lot to smile about on a glorious Sunday in downtown Miami. He was so much faster than the other runners in the ING Miami Marathon that they didn’t know he existed – that is, until he cruised to the finish in 2 hours 12 minutes 57 seconds.

Alemayehu, part of a combined marathon and half marathon field of 17,022 starters (out of an event-record 21,116 entrants), missed the course record by 35 seconds.

“The first-place guy, I thought he was a half marathon guy,’’ said Michael Wardian, the 2010 ING Miami victor who was placed third on Sunday in 2:23:41. Wardian raced the whole way with runner-up Benazzouz Slimani of Morocco (2:18:23), thinking, along with Slimani, that the two of them were fighting for the victory. “He was so far ahead,’’ Wardian said of Alemayehu. “He was crushing everybody.”

Bekana Daba, an Ethiopian national, won the Houston Marathon held on Sunday in record time, according to The Associated Press and other media reports.

Daba ran the just-over 26-mile-long race in 2 hours, 7 minutes and 4 seconds, breaking the previous record of 2:07:37, held by compatriot Teshome Gelana, who didn’t run this year.

“I was a little bit in need of going to the restroom,” Daba said through a translator, according to the AP report. “Somehow, I managed it.”

Mamitu Daska, also from Ethiopia, won the women’s marathon in Houston at a time of 2:26:33, becoming the fifth Ethiopian woman to win the race.

Daba added that he “could have ran faster” if there was no rain, according to Runnersweb.com, a site dedicated to running news. For finishing the race, he won $35,000.