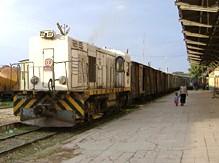 From eTurboNews: “The Ethiopian government has released information about plans to construct a major new rail network across the country. In the process, links to neighbouring countries are being prepared sooner rather than later.

“The Ethiopian Railway Corporation will be tasked to develop the new infrastructure, which will link remote parts of Ethiopia with the capital Addis Ababa and likely also with border posts to Kenya and the south of the Sudan.

Nearly 5,000 kilometers of new railway lines will now have to be planned, and subject to securing the funding, constructed over the next few years.

Neighbours Kenya and southern Sudan are reportedly both keen to see their own new railway networks expand to the Ethiopian border and create links to Addis, facilitating the easy and cost effective movement of cargo and people and promoting regional trade and travel.”