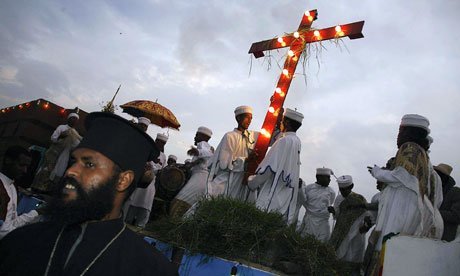 At the end of September, Addis Ababa, “new flower”, lived up to its name: fresh daisies lined the streets, strewn in piles in markets, heaped on to minibuses, gathered in bundles on the backs of white-robed women.

The occasion was Meskel, a festival named for this flower and for the cross, both of which feature prominently. Sophie McGrath writes for the Guardian newspaper…

“It officially celebrates the somewhat arcane landmark of the discovery of the cross by St Helena in the fourth century, but, as I ride a minibus to my friend Hayat’s house, its importance becomes evident. On every street I pass, people have constructed demeras, crosses with springs of meskel daisies tied to the top and logs arranged into a surrounding pyramid, to burn later.

Often they are wrapped in the Ethiopian flag, but Hayat, who’s Muslim, reminds me it’s not a national holiday. “We’re left out,” she jokes. Sitting in the garden of the compound her family share with two others, we watch a young man build a pyramid of ferns, then lift his infant sister, in her meskel-yellow dress, to the top like a Christmas fairy. Energetic music floats over from the lane, where men pile leaves into their own huge demera. Regardless of faith, Meskel, it appears, is everywhere.

Its centre, though, is Meskel Square, a large, sloping park in the town centre. By late afternoon, crowds are overflowing into the roads around it, gathering sporadically in circles to sing and clap to the beat of large double-ended drums. Blue-clad police officers with batons observe them warily. And with reason – when a parade of beautifully robed religious representatives begins, the crowd press forward until no amount of baton-waving can prevent a chaotic, riot-like breakout.

But panic soon turns to euphoria: across from this surging tide, the crowd make a wall of fire. Totally still, they light their chibos, bunches of eucalyptus wood, which flicker minutely in the encroaching dark like a map of the world at night. And then the fireworks begin. Meskel marks the end of the rains, and, sure enough, they explode in a cloudless sky – that is, until the giant demera in the centre is lit, creating a vast, dirty plume of smoke that obscures the glittering chibos in an eerie translucent miasma.

When it clears, crowds cluster round the bonfire to watch its slow demise – a fitting send-off to a spectacular day.”

Our thanks to the Guardian newspaper for this article.